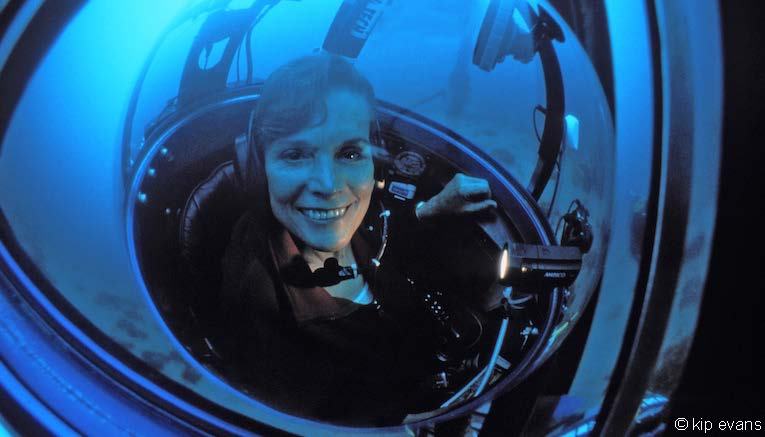 For many, dedicating a lifetime to protecting and understanding the underwater world – a world that they may never see, apart from on television screens and picture postcards – may appear ridiculous, if not radical. But for Dr. Sylvia Earle, and many like her, it is everything.

An oceanographer who has constantly pushed the boundaries of ocean exploration – from living underwater for two weeks to walking untethered over 300 metres deep on the ocean floor – Dr. Earle stands as a timeless luminary for divers worldwide. So it is with great pleasure that we announce Dr. Sylvia Earle as our “Pioneer of the Week”. Here are six ways that she changed the way we view the ocean:

How the Gulf of Mexico changed

20th April, 2010, a headline read “Deepwater Horizon Oil Spill: The Worst Environmental Disaster on Record”. Fresh papers with the image of an oil rig in flames flowed out of the printing press almost as fast as the oil from below the waves. Roughly 3.2 million barrels of crude oil spilled over the course of those 87 days, staining 1,700 kilometres of coastline, and causing long-term damage to the resident wildlife. But nobody was aware of how much of an impact it had, until Sylvia Earle showed the world.

Her heartfelt presentation of a childhood spent with her toes in seagrass meadows, her hands sifting through green algae and her eyes on countless fish in the deep and shallows, made people realise what had been lost. The Gulf of Mexico, it was “her backyard”. Perhaps more touching for some was her recollection and documentation of past dives in the fifties, into unexplored areas with a floating zoo of big and small creatures in a seemingly vibrant-of-life ocean that now, to the modern diver, appears only heartbreakingly nostalgic.

Sylvia watched an almost untouched coast and environment that was formed over millennia change in mere decades. The blue wilderness, and unspoilt powder white beaches of her childhood disappeared. Replaced by ocean-view junior suites, oversized car parks and shopping malls. Sylvia made the world aware of the sudden impact we were having on our oceans, pointing out that “by the end of the 20th century, up to 90 percent of the sharks, tuna, swordfish, marlins, groupers, turtles, whales and many other large creatures that had prospered for millions of years before were almost gone.”

The Gulf, scraped by trawls, crushed by over 60,000 kilometres of heavy pipeline, displaced by 50,000 oil and gas wells drilled since the mid-20th century, was worsened by an avalanche of oil and poisoned by toxic dispersants from the Deepwater Horizon oil spill. Sylvia became the recognisable face behind the Gulf’s future protection.

Treatment of the ocean

Due to Dr. Earle’s tireless research, the world was steadily becoming more aware of how the ocean was simply not a void to empty waste into, and after careless management of the oceans’ populations and incessant overfishing of its (limited) stock it was no longer a “sustainable” resource for food. Sylvia’s expansive research, and documentation of life beneath the waves, continues to spread awareness of the effect that our unhealthy demand for fish has had on the ocean’s population.

During dives, Sylvia would always find litter: a plastic outdoor chair upright surrounded by darkness on the ocean floor; a bag of cement smothering coral; a dolphin entangled in a fishing line. Everywhere she went she found evidence of human waste – even to places never before explored by people. Now, through her international talks and recent documentary, she is raising awareness of our devastating impact on the ocean.

In the eighties, Sylvia discovered the strange and haunting beauty of the underwater dunes in the Bahamas. Tides and ocean currents have shaped the underwater terrain much like wind has on land for millennia, but these dunes to Sylvia, appeared articulated by an almost god-like entity.

Discovering this incredible underwater terrain positively exposed the beautiful topography of the underwater world, and her groundbreaking discovery carried out in a research submersible, created a deeper public interest in bathymetry.

The late sixties was an incredible time for Dr. Earle: At four months pregnant, she became the first woman to look through the porthole of a submarine as she dived 30 metres in the submersible Deep Diver. In 1970, she led an all-female crew 15 metres underwater to live in a habitat studying ocean life and examining the effects living underwater had on the human body. Not only did Dr. Earle become a household name in ocean research after the project, she also broke the conventions of oceanographers at the time. The patriarchal underwater world, as it was before, was changing.

The beauty from below

Through research, documentation and discovery, Sylvia helped introduce the depths of the ocean to the rest of the world. Much like Jacques-Yves Cousteau, she inspired a generation of divers to explore – to go where few had been before and follow the winding canyons that staggered out of view – and against all odds she made sharks appear beautiful, almost poetic. She unconsciously challenged her followers to save the underwater world that they so loved.

Pushing the limits, in 1979 she set the world untethered diving record, descending 381 metres beneath the surface of the Pacific Ocean in a JIM diving suit.

How the ocean is changing

For those lucky enough to be able to look below the waves and dive with schools, pods, and herds of marine life that few ever get the chance to encounter, they know how the ocean is changing. Dr. Earle witnessed the ocean change over time through a tempered glass mask, viewed the beauty of the natural world from below, and tried to change a worldwide perception – that our oceans have remained the same as they always have, and will never be affected by our actions.

Nowadays, throughout the working week, Dr. Earle can be found anywhere from South Africa to Sweden, giving talks on conservation research projects, and ocean change – the life of a pioneering oceanographer is not a relaxing paddle by any means. Revisiting favourite dive sites that have changed dramatically in a decade, Dr. Earle is exposing the result of our careless impact on the ocean – and looking to change it. She remains an oceanographer of legendary status.